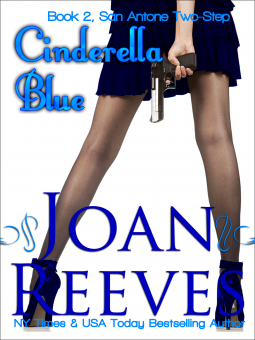 A strong woman heroine...a heart-throbbing hero...a chick lit romantic comedy...that's Cinderella Blue, Book 2, San Antone Two-Step.
Detective Andrea Luft—Andie to her friends—loves to say those three little words: "You're under arrest." Especially to bad guys who SO deserve it.
Andie is undercover to catch the thief stealing designer wedding gowns from San Antonio bridal boutiques. She's about to make an arrest when Detective Bruce Benton barges onto the scene.
The suspect escapes, and, as a reward for this screw-up, Benton and Andie are paired together as partners to close the case.

These two commitment-phobic cops have nothing in common except their tendency to annoy each other–unless you count the desire sizzling between them. But a cop romance just isn't in the cards for them.
At a cop shop, a workplace romance can cause you to make careless mistakes that can be hazardous to your health—and your career!

Too bad, because Benton realizes feisty, smart-mouthed Andie is the woman he's been waiting for. He just doesn't know how to convince her of that.   AMAZON LINK 3.5 STARS

This was a fast, fun story with good main characters.  I should also say that they each have strong personalities and ethics.   Andie also has a strong family that is backing her as well as often being protectively in her business.  Well, that would mainly be her four brothers who try to circle around her and protect her when they can.  Which isn't often Andie would say with a sigh because they all had busy lives.
Bruce has quite the reputation when it comes to women but Andie has knocked him sideways.  So his one line of defense is to be mouthy in a some offensive words.   Anything to keep her irritated and keep his mind off of his desire to be more than just her partner as a police officer.  Having been raised with four brothers, she wasn't easily offended but often amused by his tactics.
I really did enjoy the first meeting between Andie and Bruce.    It really was something out of the ordinary.  It made me smile but there was also other smile-worthy times.
There are bad guys who NEEDED to be caught in separate cases.  And they will be but not before things get interesting.
You might ask if there is any sex in the book and the answer would be yes.  It doesn't overtake the book though which is something that I appreciated a lot.