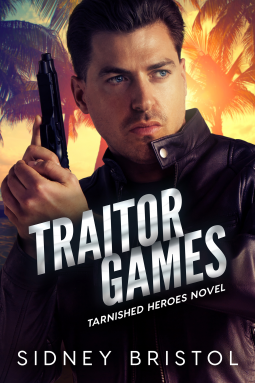 Each book in the Tarnished Heroes series is STANDALONE:

The latest installment in the Tarnished Heroes series from New York Times bestselling author Sidney Bristol.
Noah White has done a lot of bad things for the CIA, but this time they've crossed the line. He knows the kill order he's been given is a set-up and the intended target is another covert agent. They’ve finally found a line Noah won’t cross. Not with her.
Lillian Matthews is living in the crosshairs and she knows it. While her friends are spread out over the globe gathering intelligence on a rogue covert agency, it's her job to keep them all connected. Only now she's the target. And her unlikely ally is the last man she'd expect.
Lillian will have to make the biggest sacrifice of her life, because Noah will stop at nothing to protect her.  AMAZON 5 STARS

Tense.  That would be a good way to describe this book.  Especially in the beginning of it.  I was up to 15% on my kindle and already a whole lot has happened.  You can almost "taste" the danger!
Noah is a total stone-cold killer.  Or is he? There is a whole lot more to him that you would think at first.  Oh, he was a killer all right and he'd done a whole lot of awful things in the name of his country.  Not too many people can change him from his course when he makes up his mind.  But then.. Lillian happened.  And suddenly he began to do things differently than he ever imagined he would.  He often calls her Lily and blows hot and cold dealing with her.  One of the reasons is to keep her alive but also because he knows that no  way is he good for her.
Lillian has been hiding depths that few people knew about.  It kind of bugged me that her sister Cami got the family business just handed to her.  She was the face of the business but Lillian was the brains and guts.  Cami's controlling ways were really irritating because come on, really?  She's going to try to dictate all that she did?
I had to agree with one of the characters thoughts that they had a whole lot stacked against them.  I had that very same thought.  Lillian's first thoughts about her earlier interactions with Noah made her think he was a jerk.  A dangerous one but still a jerk.  Imagine her surprise when she spends more time with him and sees another side of him.
The tension and the needed moving around of the good guys and gals kept things interesting.  There were several teams of people we got to see and how they helped as much as they could.  Considering most of them were on the run trying to stay alive.  The intensity and action keeps up throughout the story. It's also done without sacrificing the quality of the depth of each person.
Great, intense conclusion to the story as well.

“I voluntarily read and reviewed an advanced copy of this book. All thoughts and opinions are my own.”
Posted by Flame at 7:49 AM