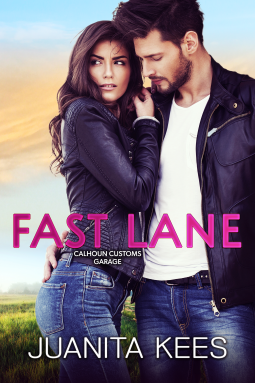 Trinity Calhoun is a name everyone knows on the race circuit, but her days in the hot seat are numbered. She’s tired of the limelight, meaningless relationships and long hours behind the wheel. When her father calls her and her sister home, she’s ready. She slips right back into the family business, finishing off the custom car projects her father has lined up. But racing is in her blood and she’s lured back to risking her life on the hot rod drag strips outside of town. It’s there she meets paramedic and volunteer firefighter, Reece Balmain, who has her re-thinking the road her life is taking.
Reece Balmain arrives in Big Fork a broken man. He’s lived and breathed through horror accidents, haunted by the faces of the people he’s cut from vehicles. He knows one thing–speed kills. He’s hoping not to see too much of it in small town Montana, until he hears about the drag races taking place outside of town. He knows Trinity Calhoun. He’s watched her race, seen her win, held his breath when her car somersaulted into barriers in Daytona Beach. He doesn’t like what she does, but he can’t stay away from the woman who’s claiming his heart.   AMAZON  3 STARS

Good emotional story with interesting, likable main characters. Both Trinity and Reece were highly skilled people with major pain in their lives.  Both having suffered incredibly painful losses and are still healing from. And they both have still more to go through separately.  Of course, their attraction to each other is so strong that it keeps pulling them back to each other.
Trinity had such a wonderfully close family who were there for each other as  much as each family member would allow.  Trinity's father is the glue that has held everyone together for years but now he has a disease that is stripping him of strength.  Chase is Trinity's oldest brother who has also been the glue to the family right alongside their father.  I liked that his nickname that he earned from his siblings is "Mother".
This story was charming and had many good points but I also feel like it didn't quite fulfill all of it's potential.   For me, maybe it's because it felt like it kept going over and over several things.  I know it needed to establish the challenges the main characters were facing.
It had a H.E.A. that I liked and one that seemed realistic and hopeful.  I also liked the eBook cover.
“I voluntarily read and reviewed an advanced copy of this book. All thoughts and opinions are my own.”
Posted by Flame at 11:04 PM