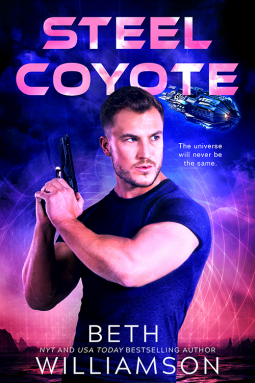 The universe is a tough place to make it as a female cargo ship captain, and Remington Hawthorne fights every day to scrape by. A sketchy deal goes south, and although she doesn’t want anyone else to touch her ship, she’s forced to accept help from the stranger who calls himself Max Fletcher. He’s hot. And he’s trouble. Big trouble. But she’s out of time, out of money, and every crooked cartel is on her tail.
Max Fletcher has spent his life running from his past. So he has no idea what makes him offer to bail out tall, gorgeous, sassy Remy when she needs a pilot to get her illegal cargo to its destination—the last place in the universe he ever wanted to land again.
One thing’s for sure, it’s gonna be a helluva ride.      AMAZON 5 STARS

I didn't start out thinking that this was going to be worthy of a 5 Star rating on Amazon.  In fact when it started out I thought, " Okay, it seems like it could be a fairly decent story." And then the language got a bit rough so this is definitely a story for the adult crowd. So was the fairly descriptive sex scenes that appear.  But then I started falling in the love with the story. It's wasn't sex with a thin story pieces around it.  It was a FULL story in which two adults get together sexually.   The good thing is that it doesn't take over the story.
Mainly the characters grabbed me first and then the action just kept getting better and better.  It got to the point where it felt like just about everyone was after them for one reason or another. And of course the inevitable question comes up.  How in the world are they going to get out of this alive? And are ALL of them going to make it out alive?  And even if they do live is their lives going to be worse?


Remy had a collection of people who were what was left of her crew. But they were more than just a crew to her, they were family.   Katie, and Foley are who are left and each were there when her father Gunner ran the ship.  Foley was described as someone who is almost blind and often breaks the things he tries to fix but is and always has been faithful to this group of people.  Katie is described as a tiny terror, a tough tiny adversary who doesn't take any guff and knows how to kick butt.
Another VERY interesting and surprising character is Saint.  I loved him! He is the Moral Compass for  Max.  I thought he made for a unusual but good addition to the story.  The relationship between Max and Saint was quite entertaining.  They also pick up two other people along the way.  Their names are Morgan and Mason and they have quite a story too.
The world building in the story I thought was pretty well done.
Although it was sad I also liked the story about how Remy got her name.
Max has depths that he keeps really well hidden.  He keeps it hidden by smiling and having an easy-going attitude hoping that people won't look any deeper.  It helps him keep people at arm's length.  But he's also lonely not really finding anywhere that he can call home. The two main characters had such different childhoods but as time goes on they find they actually do have a lot in common.
Mysteries, dangers and surprises hit the fan as things come to a head during dangerous confrontations.  It was great and a good Epilogue follows.