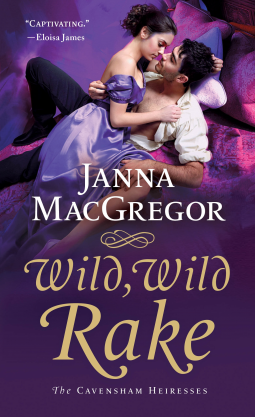 Description
Wild, Wild Rake, the next sweeping, emotional, witty, and sharp romance in the Cavensham Heiresses series from beloved author Janna MacGregor.
Her first marriage was an epic fail.
Lady Avalon Warwyk never did love her husband. Arrogant, selfish, and cruel, it’s a blessing when she’s widowed and left to raise her son all by herself. Finally, Avalon can live freely and do the work she loves: helping fallen women become businesswomen. She’s lived these past ten years with no desire to remarry—that is, until Mr. Devan Farris comes to town.
Can he convince her to take another chance at happily ever after?
Devan Farris—charming vicar, reputed rake, and the brother of Avalon’s son’s guardian—is reluctantly sent to town to keep tabs on Avalon and her son. Devan wishes he didn’t have to meddle in her affairs; he’s not one to trod on a woman’s independent nature and keen sense of convictions. But she’ll have nothing to do with a vicar with a wild reputation—even though he’s never given his heart and body to another. If only he could find a way to show Avalon who he really is on the inside—a good, true soul looking for its other half. But how can prove that he wants to love and care for her. . .until death do they part?   AMAZON LINK
5 STARS

I loved this story from start to finish.  It grabbed me early and never let go.  It was emotional, with great main characters and other people in it that included Avalon's son Thane, her sister Sophie just to mention a few.
It was a story that had great sorrow in Avalon's case but also some joys as well.  Just none of them had included any men in her life because every man had betrayed her in the past.  Her father (and mother) had basically sold her for their benefit.  It went downhill from there with no one really looking out for her. No one especially no man protected her.  It sets a good foundation for part of the story and her fight to no longer be manipulated.  There is one surprise when it comes to a woman Mary who did stand up for her at an important moment.  Mary added so much to the story too although maybe not a "heroine" that you would usually expect.
Ah, Devin.  At first I thought he was so cruel to call Avalon, Lady Warlock.   And it definitely puts her back up, time after time.   It also leads to some interesting clashes.  He has quite the wicked sense of humor along with a caring heart.  He does have something in common with Avalon and that he also refuses to be manipulated by others.  His brother is one of those that tries to do that and he does have a certain amount of leverage because of his powerful elder position. He loves Devon but he sure tries to bend him to his way of doing things.  I have to admit I didn't like him at first but time shows that there is more to him than just that.
Hang onto your seat because there is plenty of surprises, twists and turns in the story.  There is also some scripture mentioned in the story, Song of Solomon being the main one.
For me, this story was a winner that ended on a sweet H.E.A.

"I voluntarily read and reviewed an advanced copy of this book. All thoughts and opinions are my own.”
Posted by Flame at 2:13 PM