BOOK REVIEW- Burn for Me: (A Hidden Legacy Novel ) by Ilona Andrews 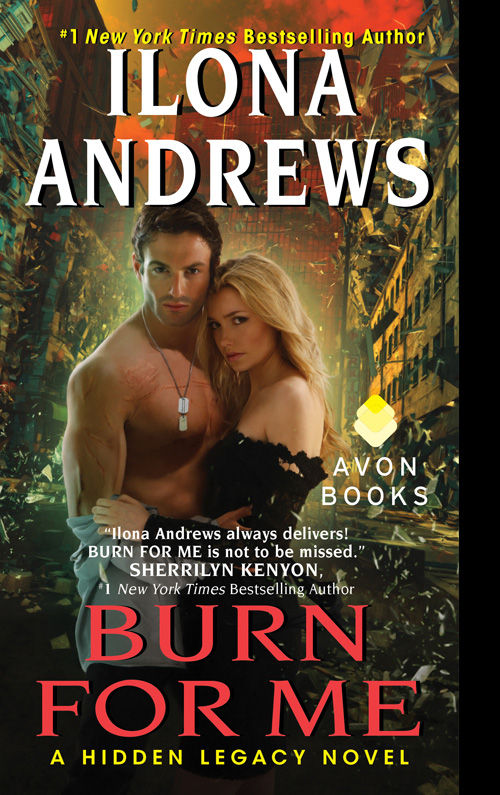 #1 New York Times bestselling author Ilona Andrews launches a brand-new Hidden Legacy series, in which one woman must place her trust in a seductive, dangerous man who sets off an even more dangerous desire . . .
Nevada Baylor is faced with the most challenging case of her detective career—a suicide mission to bring in a suspect in a volatile situation. Nevada isn't sure she has the chops. Her quarry is a Prime, the highest rank of magic user, who can set anyone and anything on fire.
Then she's kidnapped by Connor "Mad" Rogan—a darkly tempting billionaire with equally devastating powers. Torn between wanting to run and wanting to surrender to their overwhelming attraction, Nevada must join forces with Rogan to stay alive.
Rogan's after the same target, so he needs Nevada. But she's getting under his skin, making him care about someone other than himself for a change. And, as Rogan has learned, love can be as perilous as death, especially in the magic world.   AMAZON LINK
5 STARS

What a great story! I did my usual reading a book in a series out of order.  *sigh.  I read Book #2 White Hot and was so intrigued by the mention of this first book that I just had to read it too.  It did NOT disappoint.  And now that I know more of the BEFORE it makes me want to go back and re-read White Hot again.  I now have more insight into Nevada and Mad Rogan's history.  It's hard to believe that I would enjoy it more because even without this book, it was a big hit for me.
Now... back to  THIS book.  The world-building, the different Houses (of Power) the building of the cultures and the different magical skills and powers was out of this world great!
The main characters were engaging and  Nevada has such spunk and take-no-prisoners attitude.  She doesn't take any flak off of Mad Rogan even when she is in a less than a powerful position,  I liked that gal a lot.  Some of the conversations between Nevade and Mad were pretty funny.  So add the fact that the humor is pretty good and there is plenty of danger and action.  Speaking of danger, that "fire-starter" they are pursuing is one scary, dangerous guy with a lot of other powerful people protecting and aiding him.

Nevada has her own code of honor that she lives by.  It's a pretty high one when you look at some of the other people around her.  But that doesn't mean her family though.  They add so much to the story.  Her mom, grandmother, sisters and cousin all have their own strengths and distinct often funny personalities.  They also live by a code of honor that is usually at least 3 rules.  Something that Nevada shares in the story.
All in all, I enjoyed every last bit of this story and it left me wanting more of the adventures.
Posted by Flame at 8:56 PM