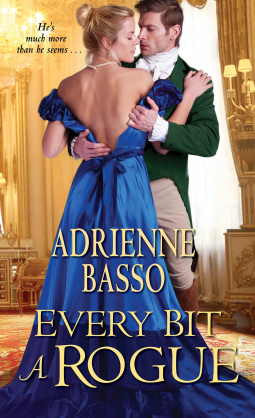 When a young lady sacrifices her reputation to save a viscount, it’s the beginning of an extraordinary adventure in Adrienne Basso’s captivating Regency tale . . .

Jon Burwell, Viscount Kendall, knows what the gossips say about him. They claim he’s been a dejected, half-mad recluse ever since he was jilted at the altar. The simple truth is that Jon has thrown all the passion he once had for his fiancée into his latest mechanical invention. But his single-minded existence has lately been shattered by repeated encounters with Miss Emma Ellingham, his neighbor’s intriguing sister-in-law . . .

Painting and sketching have been Emma’s consolation since her own secret heartbreak. When she stumbles upon the viscount’s workshop, his machine revives her artistic imagination. The gentleman himself is even more fascinating—and deeply seductive. When Jon is accused of a crime, Emma risks her good name for his sake. But though the threat of scandal compels them to wed, only courage can overcome their pasts, and allow desire to transform into love . . .AMAZON LINK
3 STARS


Although I kind of liked both of the main characters.  They were different than the conventional expected normal that society of their times demanded.  However, this story just never seemed to really get me to like it as much as I had hoped.  For me, it was hard to keep really interested when not a lot really seemed to be happening. Sure, there were a few things going on but it just seemed to lack some real depth as well; even with both of them giving their own point of views.
Both Emma and Jon had good family members that were part of the story.  It just didn't hook me into the story all that much.  I didn't hate it but I didn't love it either.
There is a H.E.A. which I did feel like they deserved because they were both good and honorable people.