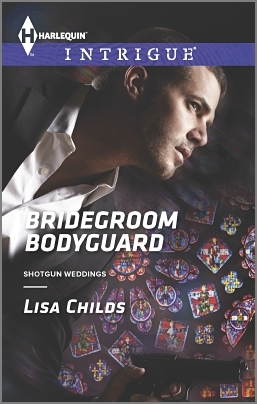 In Lisa Childs's Shotgun Weddings miniseries, a confirmed bachelor must walk down the aisle to protect his newborn son Someone is trying to kill bodyguard Parker Payne. But what's more shocking is the woman who shows up claiming he's the father of her child. The baby boy is Parker's spitting image, but how could he have forgotten a passionate encounter with this woman with caramel eyes? Sharon Wells has raised Parker's son since his birth. Now with a homicidal maniac coming after her and her son, it's Parker's unexpected proposal that may be the real danger. Sharon knows Parker just wants to protect them. But with passion flaring and a murderer intent on completing his personal mission, any distraction could mean the difference between life and death.  AMAZON LINK
4 .5 STARS

I really liked this story a lot. It had great main characters, good secondary people and the tension was top notch.  I especially liked Penny when she showed up in the story.  That would be Parker's mom.
It was a nice touch to have a short list of the characters in the story at the beginning of the book.
What a lonely, loveless life Sharon has led.  But baby Ethan is someone who does love her and she has poured so much of her own love into him.  She's protected him with everything she has.  Sharon has a whole lot of doubts about Parker even though she was told to trust no one but him.
The story starts out in a physically explosive way that catches Parker in the blast.  It's not going to be the only explosive surprise headed his way. Hearing that he has a son is one that definitely tosses him on his butt for a while.
There is plenty of action, danger and the Payne family pulling together that I enjoyed.  Sharon and Parker pulling together was also something enjoyable.  They have to work through quite a few doubts about each other for quite a while but they get there.
The Payne family has another surprise that stuns them and that they have to work through.
The story also ends in an explosive way as well.  I liked how the person who was after them was revealed and the motive as well.  This story kept me involved every step of the way.
There is a good H.E.A.  with the Epilogue showing how they got there.