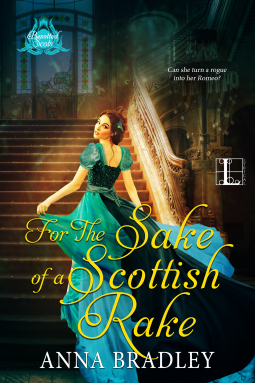 After a sheltered upbringing, Lady Lucinda Sutcliffe is finally embarking on her first season, eager to experience everything she’s missed. When Lucy realizes that her uncle plans to quickly marry her off in exchange for a slice of her fortune, she begs a favor of a new acquaintance, Ciaran Ramsey. If Lucy remains single until she turns twenty-one, she—and her money—will be out of her uncle’s power. All the charming Scot needs to do is woo her for six weeks, and then jilt her . . . The Ramseys don’t need the scandal of a false engagement attached to their name. But Lucy’s older suitor is both distasteful and dangerous, and Ciaran can’t allow his lovely friend to be forced to marry such a man. And besides, the more time Ciaran spends with his new “betrothed,” the more their ruse begins to feel very much like the real thing. Passion like this is impossible to feign, but how much is a rogue willing to risk for love?. . .AMAZON LINK
3.5 STARS

This book starts out slow, building up the friendship between the two main characters.  Lucy challenges Ciaran in good ways and with her what you see is what you get.  She is refreshing and totally honest.  She also has been somewhat isolated and without true friends because of her strange upbringing.  But when she meets Ciaran things begin to change for the better.   Although at first Ciaran is determined that he doesn't need another friend and most definitely not a woman friend.  But Lucy is way too lively and welcoming to resist forever.  In fact I do like that fact that eventually he realizes that she helped bring him back to life.    Something that his family has been racking their brains on how to help him.
Lucy's uncle Jarvis is a top notch villain and just as slippery and evil as they come. However, it didn't take long to like his daughter Eloisa and Aunt Jarvis.  The relationship between the three of them was a good one.  Uncle Jarvis had them totally terrified and under his mean thumb.  There was also a friendship that developed between Lucy, Eloisa and Lady Felicia.  Making Eloisa and Felicia and their possible romances a good addition. There is also some tender moments and humor in the story too.  Lucy's feelings about learning to dance the Quadrille being like the 9th circle of hell being one of them.  Having said all of this... although I kind of liked the story, and I did like the M.C.'s, the slow pace pulled the story down for me.  I ended up with mixed feelings about it but it does come with a sweet H.E.A.


"I voluntarily read and reviewed an advanced copy of this book. All thoughts and opinions are my own.”
Posted by Flame at 4:58 PM