BOOK REVIEW- Waiting on a Cowboy by Jennifer Ryan * 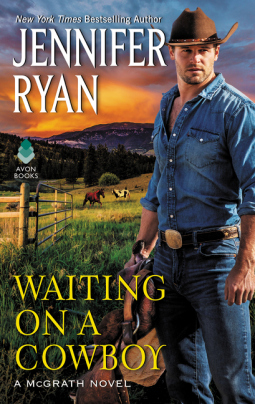 Meet New York Times bestselling author Jennifer Ryan’s McGraths: a family as untamed as the land they call home.
Tate McGrath just didn’t get it. Why was Liz Scott, his best friend—and the person he relied on and trusted most—suddenly avoiding him! When he finally tracks her down, he finds her with a man he knows nothing about and she’s been dating for weeks. Suddenly, he can’t make himself ignore her tempting curves and deep green eyes, and all he wants to do is keep her all to himself. What was going on? Could he possibly be…jealous?
Liz had made the decision: stop carrying a torch for Tate and find a guy who wants to be her everything. Tate had always seen her as honest, dependable, smart, kind…Best friend, not girlfriend! And she needed to give up the dream of marrying the man she’d loved since preschool and move on.
But when Liz’s boyfriend turns dangerous, Tate steps up to help and soon realizes he’s the cowboy hero she’s been waiting for him to be all along.  AMAZON LINK
3 STARS

I had high hopes for this book and while I enjoyed some of it, other parts not so much.
I liked both of the main characters, even though Tate was SO clueless when it comes to Liz.   I liked the history of their being friends for so many years.   I even liked that Liz got her gumption up and went looking for love somewhere else.  She was tired of waiting for this cowboy.  Which makes this a really good title for this book.
However, this book was SO slow because for me it got dragged down with all the rehashing of regrets.  That would be Tate doing most of that.  He wish washed back and forth for a while about whether trying to have more with Liz and possibly lose their friendship.   It wasn't until about 50% through the story that things really started to happen more.  There are plenty of twists, turns and danger from that point on.
Liz's new boyfriend Clint turned out to be really slick.
There are plenty of secondary people in the story and they added a lot to the story.  Tate's brother Declan had a part to play in this story.  And now I want to read his story of finding love.  Detective Valdez also played a part in this story too.
The book does have some dramatic things happen as it winds down to the end.


"I voluntarily read and reviewed an advanced copy of this book. All thoughts and opinions are my own.”
Posted by Flame at 6:25 PM